Theory-building in the fields of democratisation research and the promotion of democracy assigns citizens a key role in preventing democratic backsliding: By reacting to authoritarian tendencies of elected politicians and voting them out of office, citizens perform a controlling function that is essential for the survival of democracy.

In highly polarized environments, however, citizens are less inclined to take on the role of a watchdog and more willing to accept violations of democratic rules to help their side win. Deepening polarization then offers a gateway for democratic backsliding.

In cooperation with Professor Milan Svolik from Yale University, we tested this hypothesis in a cross-national survey in seven European democracies (Estonia, Germany, Poland, Serbia, Spain, Sweden, and Ukraine) to find answers to the following questions:

Our findings reveal that respondents in the seven countries under investigation have a solid understanding of what democracy is and what it is not.

Voters are not indifferent to violations of democratic norms

The majority of voters cherish democracy and punish candidates who violate democratic norms. The respondents, however, do not value all elements of liberal democracy equally. Candidates who incite violence to undermine electoral fairness (such as politicians who violently disrupt rallies) are most likely to be punished at the ballot box. Violations of checks and balances (e.g., passing laws without debate) and civil liberties (e.g., banning foreign funding for NGOs and labor unions) receive less punishment.

We find that people are partisan above everything else. Most voters forgive politicians who violate democratic norms if they represent the voters’ preferred party. This serves as proof of the ongoing strength of political parties, but also as a reminder of how important it is for party organizations to keep undemocratic politicians in check. It is also a call on all voters (partisan or non-partisan) to act as watchdogs for democracy.

Citizens may neglect democratic principles in favor of policy preferences and partisan allegiances. Specifically, voters tend to trade off democratic values for their preferred identity policies (e.g., same-sex couples' rights and immigration). When it comes to these issues, voters do rather disregard democratic violations than have their "camp" lose. The purely socio-economic interests do not seem to have that same strong influence on voters. According to our study, it appears that representing the voters’ preferred identity policies protect politicians from losing votes, even if they violate democratic principles.

Identity-democracy trade-offs are heightened by polarization

In addition to uncovering that voters tend to trade off democratic norms for their preferred identity policies, our study also finds compelling evidence that identity-related issues are polarizing societies significantly more than socio-economic disagreements (e.g., taxes).

Same-sex couples’ rights is the most polarized issue

Albeit often not the most important issue to voters, same-sex couples’ rights is the most polarizing issue on average in our case countries. In combination with a high willingness to forgive undemocratic behavior by both right- and left-leaning voters, this suggests the potential of this issue to undermine democracy.

The far right is a danger to democracy

Voters of far-right parties are the least willing to punish undemocratic conduct and are the most partisan (most reluctant to punish their favorite party’s candidates when they violate democratic principles). As a result, our survey finds no evidence to support the claim that both far right and far left pose equal threats to democracy. We can see that right-wing or far-right party supporters are far more conducive to undermining democracy than party supporters of left-wing or far left parties.

While on average, voters with left-leaning positions regarding social and economic issues are far more willing to punish undemocratic conduct in general and across most countries, these voters nevertheless do play an ambivalent role: As soon as their preferred policies on identity issues are at play (e.g., the rights of same-sex couples), socially left-leaning voters show a strong tendency to trade off democratic principles for their preferred policy.

Polarization is a driver for autocratization – but not the only one

In contrast to the situation in the US, voters in the countries studied were not the most likely to forgive a candidate’s undemocratic positions on issues that were intensely polarizing. The salience of an issue can also make people tolerate undemocratic behavior even if a society is not polarized over it.

It seems that identity policies are a consistent determinant for a heightened willingness to accept democratic violations, and our study found that this effect is not regionally contained. The trade-off between democracy and identity policies by which politicians are potentially able to autocratize their countries holds true everywhere, from Ukraine to Sweden. This finding opposes culturally deterministic assumptions on democratic backsliding and indicates instead that some politicians in the Eastern European countries have better understood and made more efficient use of these mechanisms for their own interests.

We found that respondents with higher levels of education, higher levels of interest in politics, an inherent opposition to strong leaders and a greater understanding of democracy punish undemocratic politicians more than other social groups. In light of this, it is necessary to encourage civic education in relation to democracy as well as its various elements.

Voters do not value all elements of liberal democracy equally.

They value electoral fairness more than checks and balances and civil liberties. It appears that they do not consider the latter items as indispensable as the former. Moreover, we see that voters with a greater understanding of democracy punish undemocratic politicians more. In light of this, it is imperative that future democracy support efforts educate voters accordingly. This would strengthen democracy and make it more resilient.

One of our central findings is that identity-based policies protect politicians from losing votes, even if they violate democratic principles. Against this backdrop, politicians in some countries have elevated the salience of such topics on the political agenda, thereby exacerbating divisions between their party and the opposition and facilitating a subversion of democracy as well. If democratic standards are to be upheld, they should refrain from instrumentalizing and exploiting these issues for their particular gains. Moreover, awareness of the potential for instrumentalization and exploitation of identity-based policies should be raised.

Our study shows that voters are especially inclined to forgive undemocratic behavior when an undemocratic candidate is associated with the voter's favorite party. This finding indicates that politicians and political parties have a great deal of responsibility in safe-guarding democracy. They should not appeal to the voters’ lowest instincts in order to boost their chances in the elections.

Polarization is not the sole menace to democracy.

Polarization does play an important role in the deterioration of democracy, but it is certainly not the only driver. Identifying the issues which polarize societies significantly, and hence menace democracy, is valuable for democratic resilience. Innovative methods for citizens’ participation could be a tool to counter processes of polarization, but more focus on depolarization measures will be required.

Western Europe is not immune to identity-driven democratic backsliding.

Not only in Eastern Europe, but also in Western Europe there is a vast potential for political actors to subvert democracy in the name of identity-based interests. This finding opposes culturally deterministic assumptions on democratic backsliding and could contribute to enhancing and nuancing future research on this topic.

Autocratization does not necessarily require polarization.

Issues that are not polarizing can also be drivers of autocratization. The implications of this finding, which speaks for a more nuanced and context-specific understanding of the effects of polarization on democratic backsliding, while keeping policy salience in mind, can be used in future research on democratic backsliding. We furthermore hope that this outcome of our study will encourage future research on the phenomenon.

Voters on the right and the left play a different role when it comes to the erosion of democracy.

Forgiveness of democratic violations is particularly prevalent along partisan lines, and voters of far-right parties are least inclined to punish undemocratic behavior. As a result, these voters are most conducive to undermining democratic systems. By contrast, voters on the left are generally less tolerant of democratic breaches. Yet, they value certain policies (e.g., the rights of same-sex couples) so highly that they are willing to sacrifice other democratic principles for them. 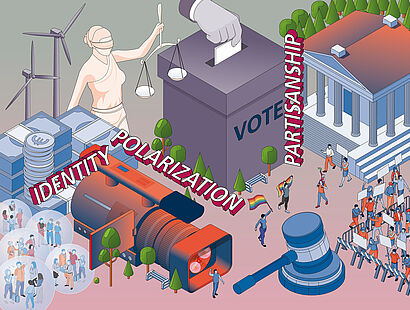 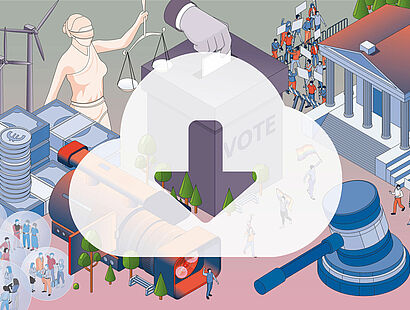 Download all graphics of the study (c Florian Müller) and our FES Logo. More

Our new study on identity, polarization and partisanship in 7 European countries is out!

Interview with Milan Svolik about polarization.