Johanna Lutz studied Political Science, Public Law, and Intercultural Business Communication in Jena (Germany) and Cairo (Egypt). Prior to her current role heading the new FES regional office on Democracy in the OSCE region, based in Vienna, she was Deputy Head of the FES EU-Office in Brussels (2014-2019) and presided over the European Network of Political Foundations (ENoP) in Brussels (2018/19).

She has worked for a member of the German Parliament (Bundestag) (2009), and for the SPD Party Group in the Regional Parliament (Landtag) of Brandenburg (2010-2012), and early experience includes working for the political magazine Berliner Republik (2009-2012). Having also lived and worked in Brazil from 2001-02, and in 2005, Johanna appreciates and embraces working in an international environment.

Filip Milačić, born in Podgorica, Montenegro. He has studied political sciences and Eastern European history at the University of Heidelberg, receiving his PhD from Humboldt University. Previously, he worked for the Organization for the Security and Co-operation in Europe (OSCE) as well as at the University of Rijeka, University of Montenegro and in German Bundestag. He was also a visiting fellow at the Institute for Human Sciences in Vienna. He is currently a research affiliate at Democracy Institute of the Central European University (CEU). At FES Democracy of the Future, he is lead project manager for the project lines Citizens' Assemblies and Polarisation & Democracy.

Michael Jennewein, born and raised in Innsbruck (Austria), studied Philosophy & Economics (BA) at the University of Bayreuth in Germany and Technology Governance & Digital Transformation (MA) at Tallinn University of Technology in Estonia.

Before joining FES Democracy of the Future, he worked as an economist at the Vienna-based progressive think tank Momentum Institut. Earlier experience includes internships at the German NGO Lobbycontrol and at the Tyrolean representation at the EU in Brussels. His research interests include inequality, globalisation, public administration, e-governance, and economic & social policy. At FES Democracy of the Future, he is lead project manager for the project lines Inequality & Democracy and Right-Wing Populism.

Born in Vienna, Ludwig List is an economist and academic who works with global challenges including poverty and economic inequality. While establishing himself, Ludwig obtained a bachelor degree from the University of Vienna, two master degrees from Kingston University (UK) and Université Paris 13 (France) and a PhD at Sorbonne Paris Nord. After working as a scientific advisor to the City of Vienna for two years, where Ludwig supervised studies, research and networking, he became a senior researcher at FES Democracy of the Future. Hitting the ground running, Ludwig advises other FES regional offices around the world on empirical social and trend research. Ludwig’s further research interests range from questions of industrial policy to economic policy and meta-analysis.

Born in Pécs (Hungary), she studied BA in International Relations and than MSc International Economy und Business at Andrássy University Budapest. Currently she is studying BA In Psychology at the University of Pécs. As one of the newest additions to the team, she started working at FES Democracy of Future in 2022. Her role is assisting in the coordination of projects, serving as a gateway between the different agents of the project, event management for ongoing projects and publications of the Democracy team and the smooth reinforcement of deadlines.

Previously she has been working at the Budapest Campus of FernUniversität in Hagen, a german distance university, with a focus on communication (including social media and PR), project and event management and administration.

Gloria Sack, born in Grevesmühlen (Mecklenburg-Vorpommern, Northern Germany), studied business administration at the Freie Universität Berlin with a focus on taxes and accounting. In July 2019, she started working at FES ROCPE in Vienna. As a very experienced accountant, Gloria Sack is responsible for all matters concerning financial management and controlling.

Previously, she worked for the Friedrich-Ebert-Stiftung in Berlin for seven years. Her main tasks were financial management and controlling of several offices in Eastern Central and South Eastern Europe and the EU office of the FES in Brussels. She also was in charge of auditing compliance with regulations and guidelines for the FES.

The protection of your data is important for us.
Click on "Activate" to allow us requesting Open Street Map servers to show map. 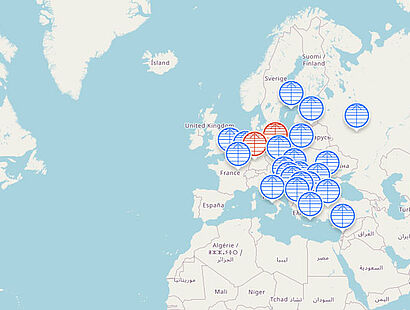 FES offices in the OSCE region

Learn more about our FES offices in the OSCE region More

Marco Schwarz is a Policy Officer for Democracy & Rule of Law at the FES EU Office in Brussels and works on the democratic legitimacy of the EU, European values and the Conference on the Future of Europe as well as democracy support.